Some apps are bigger than others, and some apps need more help than others. With more than 1.5 million and 1.4 million apps on Google Play and iTunes respectively, it’s only natural that most apps will need all the help they can get. At Moburst, we aim to provide that kind of assistance, helping various apps with ASO (app store optimization) methods.

There are multiple reasons why apps should conduct ASO. Instead of going over the reasons, tips and recommendations, we’ll share a case study for one app that enjoyed our optimization treatment using the Sensor Tower platform.

Competing in a Difficult Niche

Mailwise is a free email client app for Android. The Israeli based app developed by Syntomo offers a clutter-free platform for accumulating multiple email accounts in one place.

Email has been growing on mobile in recent years. That isn’t a myth, but a straight-up fact. Emails are being clicked on mobile more than ever, as they now account for almost 40 percent of all clicks on available platforms. Furthermore, email isn’t only conquering mobile usage; it’s also making money out of it. Mobile email revenue has gone up 12 percent in the first quarter of 2015, and the numbers are getting bigger.

With these stats showing the power of email on mobile, apps like MailWise need to stand out and put something else on the table. Working with MailWise enabled us to understand what their forte is and emphasize their strengths accordingly.

As part of the ASO process, we used the Sensor Tower platform for viewing keywords. It’s hard enough to choose the right keywords, especially when there are rival apps using the most popular ones. Instead of going with the flow, we focused on different kinds of keywords were less common, and therefore had better chances to succeed.

This chart depicts which keywords are the current winners on the search term board, showing remarkable results. 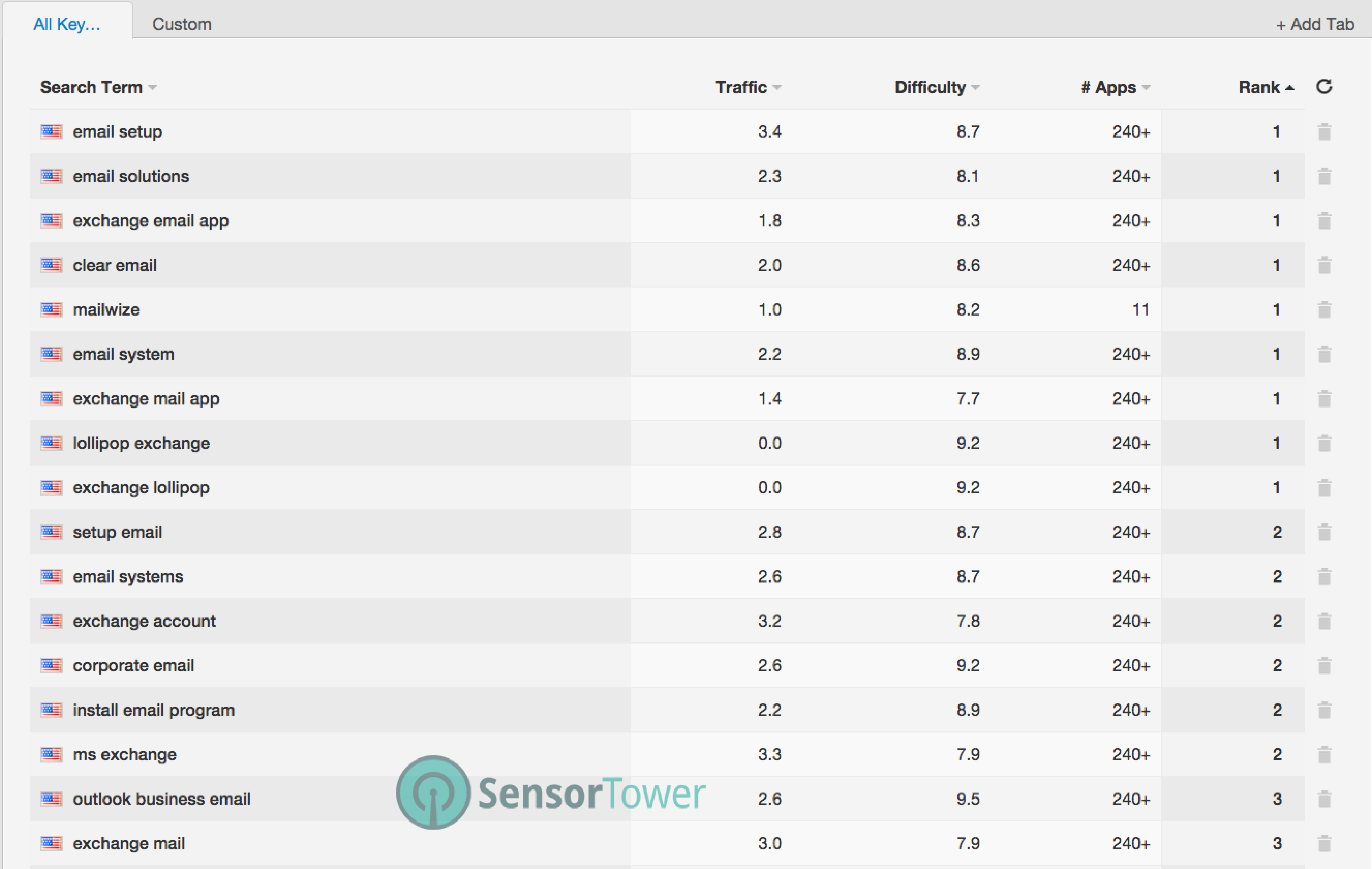 Impressive, isn’t it? Having multiple keywords in the number 1 spot is always a sight for sore eyes, but as many will say, it is more difficult to stay on top than to get there. With that challenge in mind, in order to maintain MailWise’s position as a top email app, let’s view the keywords that helped the app to reach that position.

The graphs below include historical rankings for some of the most competitive keywords in the industry and show how, through ongoing optimization, MailWise was able to consistently stay in the top positions. 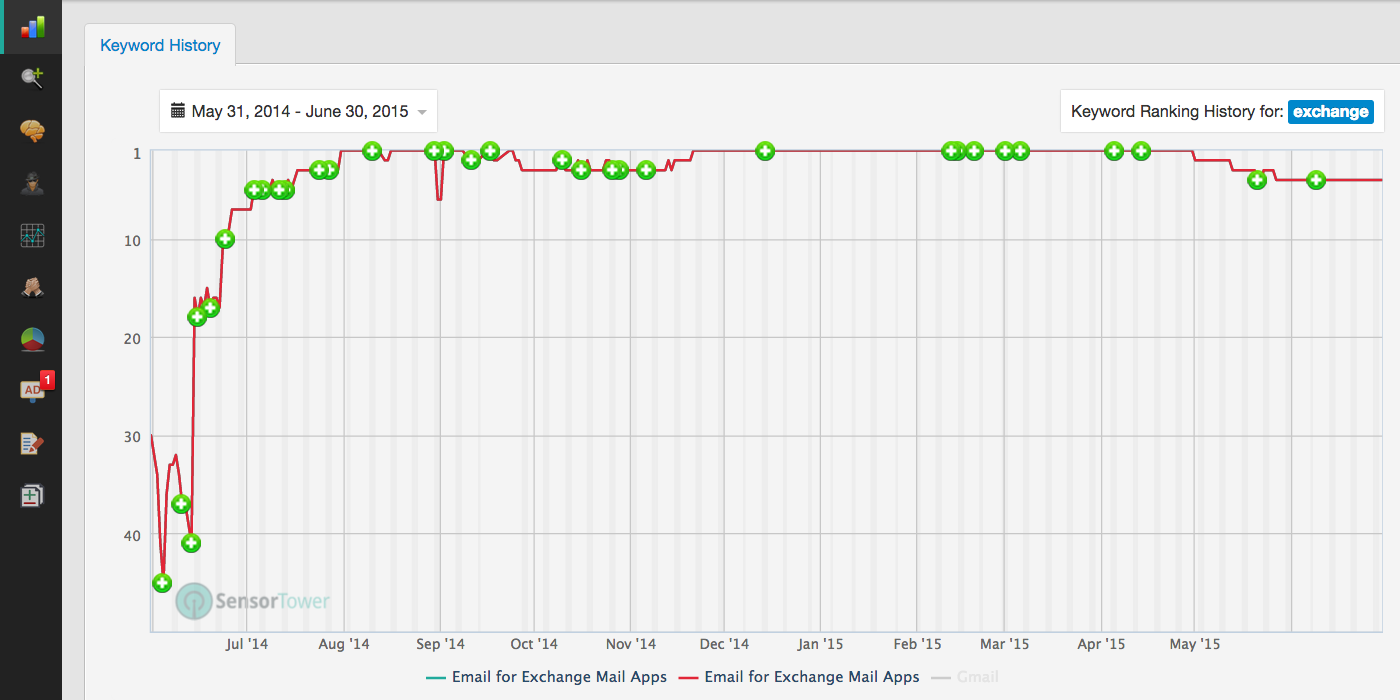 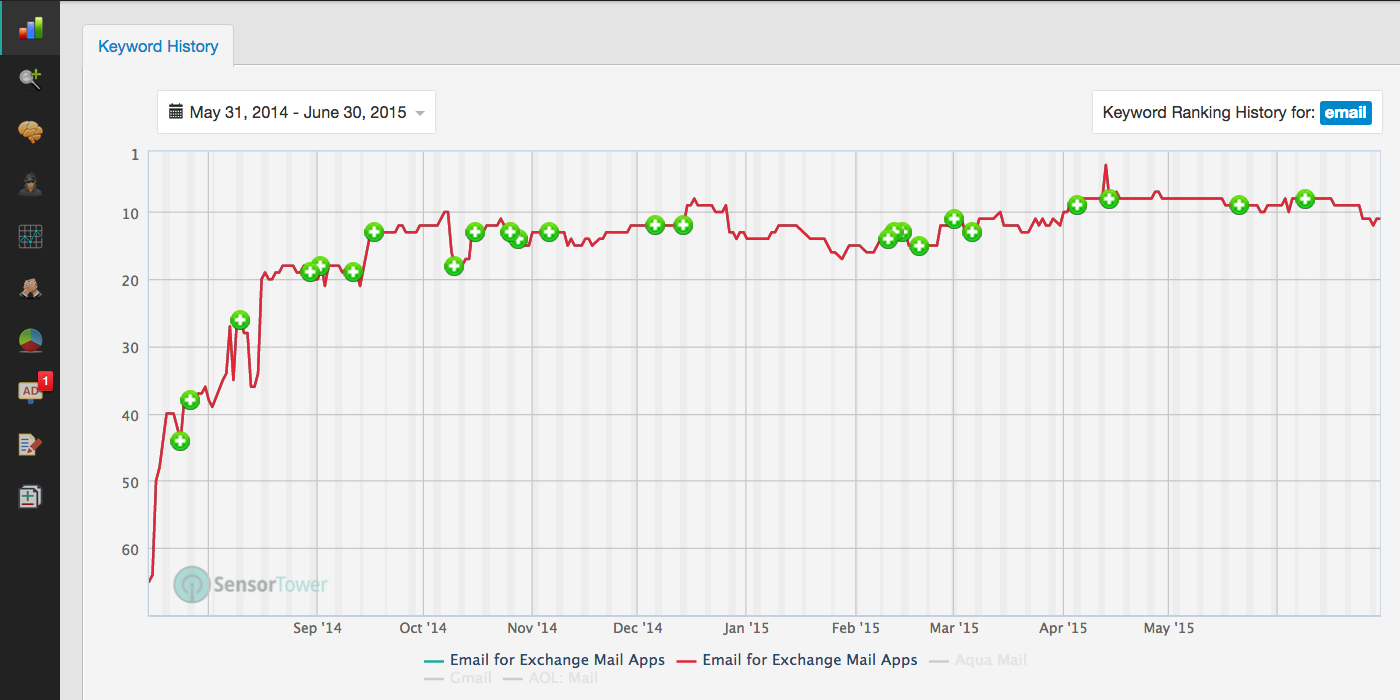 Words don’t come easy, especially when the goal is to rank as high as possible and lead to organic downloads. However, as with any ASO project, optimizing for keywords is only one step of the process. The screenshots, logo and featured graphics all went through a series of A/B testing (a randomized experiment with two variants) to ensure the creative elements being used are the ones with the best conversion rates.

Following multiple steps which were taken during the ASO and testing process, MailWise increased its visibility as a top exchange email app, gaining more than 50,000 users who enjoy the service. MailWise also achieved an average rating of 4.5 stars on Google Play.

With the work we’ve done on Sensor Tower for MailWise, the email exchange app established itself as one of the top in its category. ASO is crucial for apps like MailWise, which oftentimes do not have big marketing campaign budgets, and need to save every penny they have.

Lior Eldan
Lior Eldan is the Co-Founder & COO of Moburst. As an ASO and Mobile media expert, Lior mentors and supports startups, helping them develop and execute their mobile marketing strategies.